Travel with me — to places unknown — on a path of words and imagination.

The Gunj: A Year in India 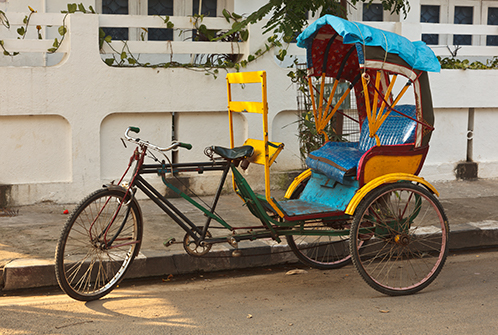 The Gunj – a strange and unlikely name for a burst of personal freedom and an afternoon of culinary delight. Nineteen years old, I had traveled halfway around the world to study at a girls’ college in India, only to find my freedom curtailed by strict institutional and cultural rules. The Gunj was a local shopping center in Lucknow that female students were allowed to frequent without chaperons.

Permission granted for an expedition, a friend and I whirred along Faizabad Road on a bicycle rickshaw, bell ringing. Awash in a mosaic of sounds, sights and smells, we wove through chickens, a bullock standing in the middle of the road, carts and wagons of every description. Old men wrapped in blankets sat talking under a banyan tree. A monkey nut seller smoked a hookah pipe on the bridge of the Gompti River. Wallas squatted next to their wares of puris, chapattis and samosas displayed in glass boxes, in a useless attempt to keep away flies. Dung clung to the large wooden wheels of a bail gharry drawn by an emaciated ox. A dozen women, children, and old men clung to the moving cart. A pundit in a Nehru shirt walked behind carrying an umbrella.

I saw all this and more on the way to the Gunj. The images changed like a kaleidoscope from one moment to the next, a rainbow of bright saris and head turbans. The smell of dung, urine and curried spices, combined with the heat of the sun beseiged my olfactory senses.

Climbing out of the rickshaw at our destination, I paid the skinny rickshaw driver 50 paisa for the ride. “Salaam, Baba,” he intoned with a smile through missing teeth.

A swarm of small children immediately surrounded us.

“Ek paisa, Baba?” they pleaded holding out dirty hands for alms. Dressed in rags and barefoot, they followed us to the shopping stalls, desperate for some coins from the white Missahibs. I once gave a little girl a paisa only to be followed for an hour by a covey of children; it was not possible to help them all.

“Namaste, Missahib,” the shopkeepers greeted us. “Beautiful chappals, very good leather. Nice, for you.” English was the second language of India, and the merchants knew the words of their trade.

Bargaining was the way of life in the small shops and stalls, and that was an adventure in itself. Today I was bound for the tailor who would sew me a salvaar cumise, a comfortable two-piece garment worn by young Muslim girls. I chose a colorful print and was measured with a threadbare tape. The tailor had one sewing machine in an open stall where he sat, rhythmically rotating the foot treadle.

But the highlight of the afternoon was an indulgence at Kwalities, where once through the smoky glass door another world awaited. Inside the marble-floored restaurant cooled by undulating ceiling fans, upper class Indians took tea and pastries or sipped lhassi, a lemon yogurt drink. For a foreigner it was the only safe place to have an ice cream. And when the confection appeared in a tall parfait glass topped with whipped cream and a cherry, I was sure I had died and gone to heaven. The cold sweetness melted in my mouth and soothed my lonesome heart from the powerful strangeness of India. The smile it brought to my lips lasted all the way back up Faizabad Road to the college gate.

Ohio farm country, 1897. Louisa, the spirited eldest daughter of Herzig and Clara Steinbacher, has her whole life ahead of her. She is seventeen, and dreams of the “outside world” beyond her doorstep. But when Clara dies in childbirth, Louisa is suddenly thrust into adulthood—with the burden of her mother’s responsibilities…and the care of her younger siblings. The only world she has ever known closes around her.

Then Herzig, an elder in their strict Mennonite community, hires young, handsome Thomas to help on the farm. Thomas is hardworking, honest…and not of the Faith. But Louisa can’t hide her growing feelings for him. Her choices set in motion a transformation she never expected. But at what cost?

Available in paperback and eBook at Amazon.com